Below are the records that Almighty Beard have proudly released:

The Domestics side features ‘White, Male & Ignorant’ from their live set along with three other new, exclusive tunes.

Volunteers have been around for a while now and this single features two amazing brand new songs from them.

A compilation 7″ featuring 8 of our favourite bands around. 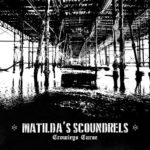 One of, if not the UK’s finest folky punk rock bands around.  This two track 7″ features “Crowley’s Curse” and “Pissheads Anthem”.

We are actively looking for more projects to get involved in, labels/bands please do get in touch and let’s chat about options!