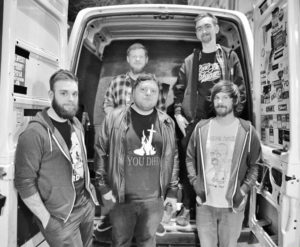 DROPTHIS are a melodic hardcore skate punk band formed in 2012 by 5 mates with shared interests in beer, punk rock and video games. Between a few drummers coming and going, releasing 2 EPs (with an album out 2016!), and a few baccy runs to Europe, DROPTHIS maintain the same philosophy: to have fun, to make loads of music and play as many shows as physically possible before we choke on our own vans fumes and get buried in the channel… And to write the shortest, most grotesque song in the world of course. Socio-analytical, political, hypocritical punk rock.