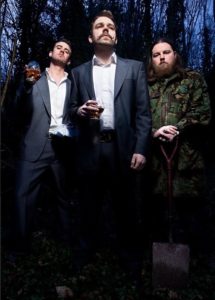 In early 2009 Mr Shrubsall was haunted by a terrible ghastly apparition. The tartan trousered, UK Subs patched, chain walleted ghost of punk-rock future. He was warned that if he didn’t donate his illicit earnings to Punk Rock he would be doomed for eternity.

Perhaps it was just an undigested bit of beef, a blot of mustard, a crumb of cheese or the 2 large bottles of diamond white he had consumed that evening, but the next day Mr Shrubsall set out to do just what had been asked: To give back every last shilling he had stolen and help get those punks to their next can of Super Tenants.

Joined by his accountant and a mysterious millionaire jet setter drummer he continues his quest to this day.

Ted Dibiase and the Million Dollar Punk Band are a politically ironic comedic punk band. Featured multiple times on the Mike Davies Radio 1 Punk Show, the band have shared the stage with acts such as Leftover Crack, Conflict, Discharge, The Dwarves and countless others. Dressed in suits and carrying a briefcase filled with a plethora of props they perform a set largely mocking the media, political parties and the generally ignorant.